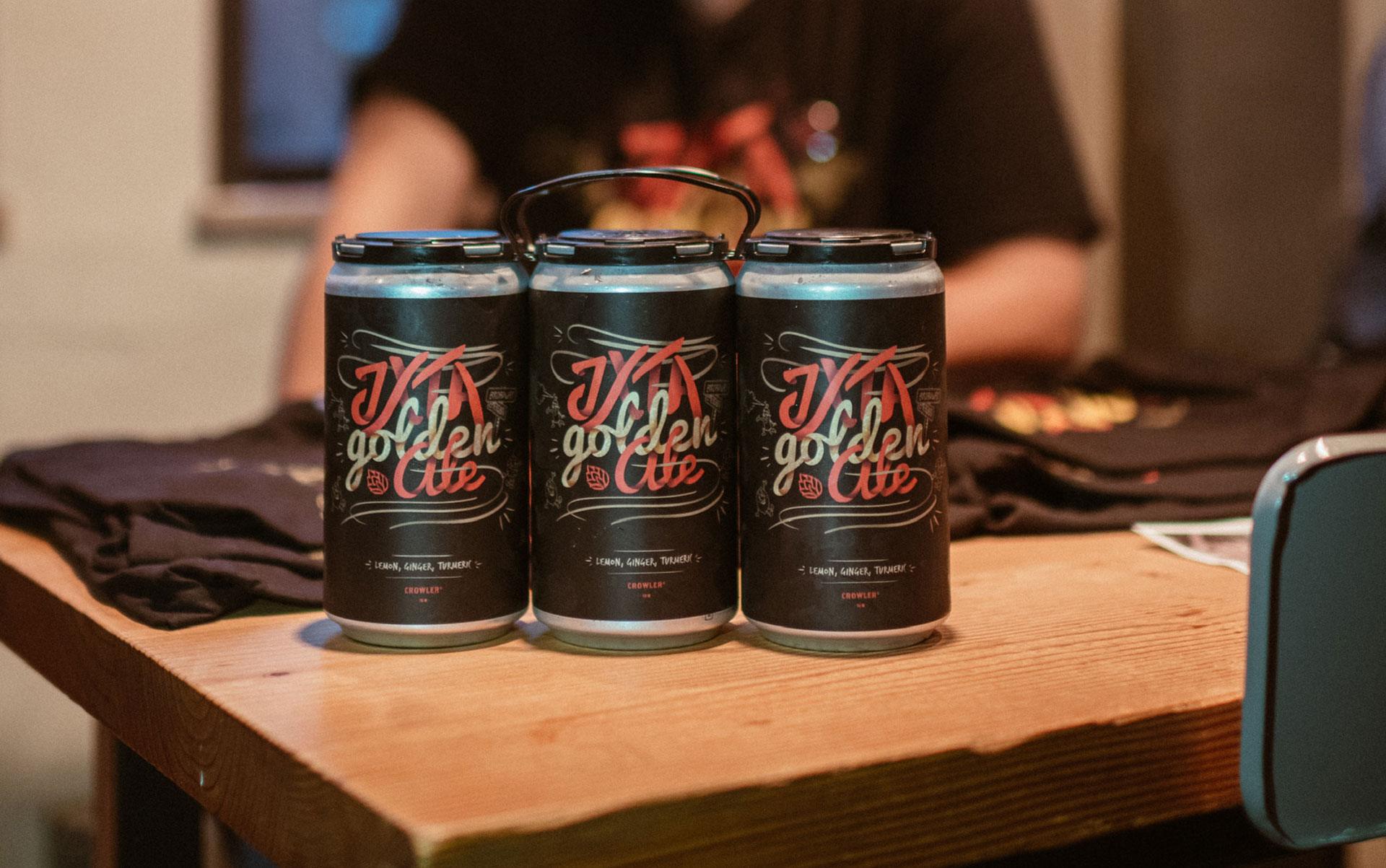 We are stoked to have partnered with Dangerous Man Brewing Co. to create a limited-edition, custom-brewed JXTA Golden Ale! Brewed in a small batch, the golden ale’s flavor profile of lemon, turmeric, and ginger was developed by JXTA Chief Cultural Producer Roger Cummings and the crowler (a 750ml can of beer) label was designed by JXTA youth apprentices in the Graphic Design Lab. For every beer sold during its limited run, Dangerous Man generously donates $1 to help fund our forthcoming Skate-able art plaza. Read on to learn more about the process, our collaboration with Dangerous Man, and a quick interview with the lead apprentice on the project, Patricio De Lara. Plus, check out photos from the event here!

This summer, the folks at Northeast’s Dangerous Man Brewing Co. approached us to collaborate on a JXTA-themed brew. As part of Dangerous Man’s commitment to giving back to their community, the brewery identifies and seeks out opportunities to create one-of-a-kind limited-edition brews with organizations that provide valuable goods, services, and programs to the Twin Cities area.

“We choose our community partners that are providing positive impact programs to the Minneapolis/St. Paul area,” says Hilari Bandow, former Operations Manager and Events and Volunteer Coordinator at Dangerous Man who initially reached out to us about this project. “The $1 kickback program is a way to raise funds for an organization by giving a dollar from every beer sold in the taproom to the nonprofit. This program runs for the entire duration of the beer’s life on tap.” As part of this collaboration, $1 of every JXTA Golden Ale sold will go towards programming the skate-able art plaza we’re building on the corner of Emerson and Broadway (read more about that here). 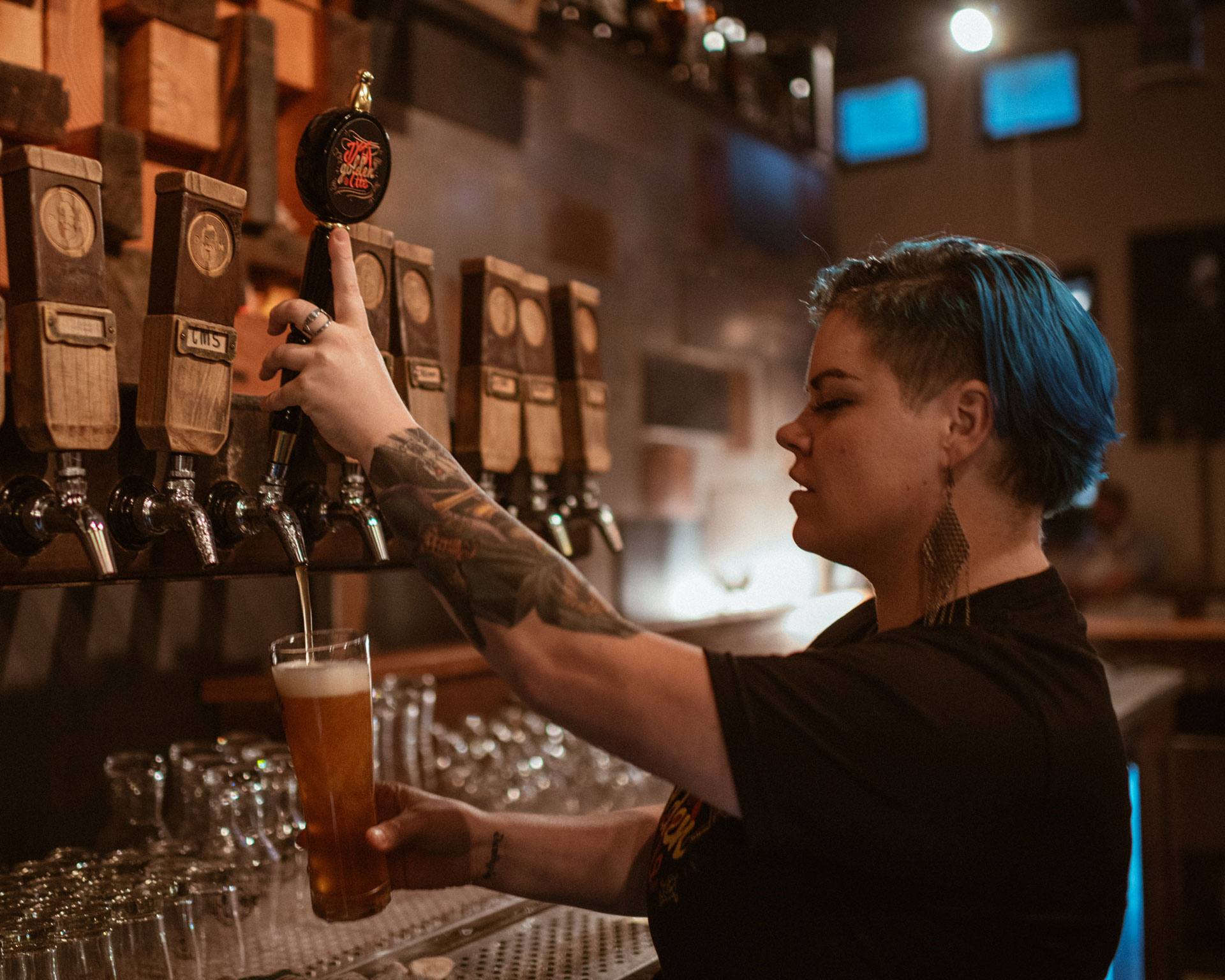 After Dangerous Man reached out to us, we worked with their team to develop the brand and flavor of the beer. JXTA Chief Cultural Producer and co-founder Roger Cummings sat down with DM Brewer John Leingang to sample brew types and flavor add-on options. Taking inspiration from his daily morning tea routine, he settled on a golden ale with the healthy combination of lemon, ginger, and turmeric. All three flavors were well-suited to lend a bright color profile to the golden ale, and the addition of turmeric was an exciting one for the Dangerous Man team as they had never brewed with it before.

Next came the designs. Several of the Graphic Design Lab apprentices produced a number of concepts, each with a distinct look and feel. All of them were informed by the JXTA brand as well as the beer’s flavors and color scheme (check out a few of the runners-up below). The final designs for the crowlers and the accompanying merchandise were chosen by Roger Cummings. With these designs, a limited run of t-shirts were printed by JXTA’s Textiles & Screen Printing Lab. These limited t-shirts were available for purchase at the beer’s release event, in addition to buttons and stickers. 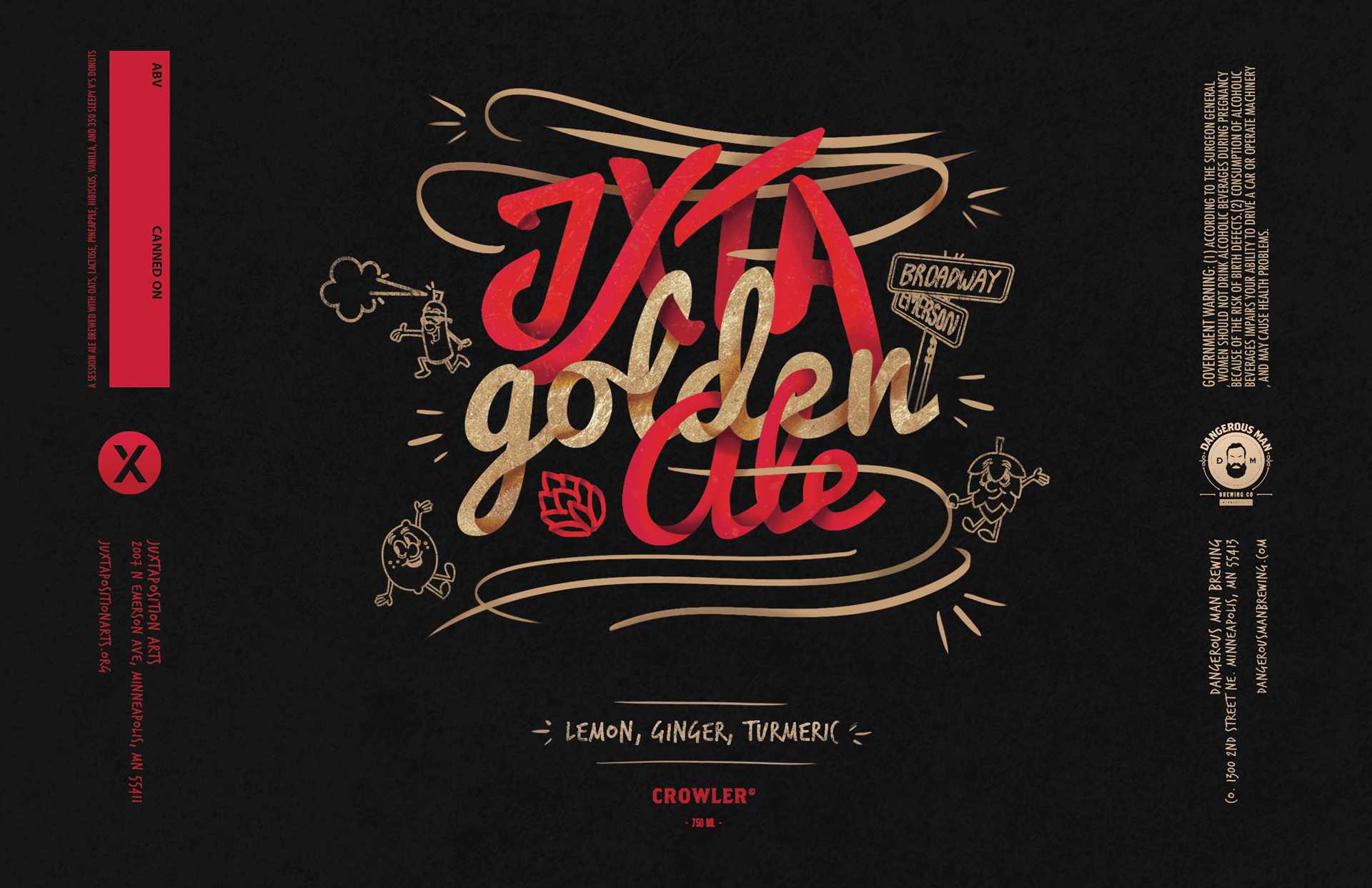 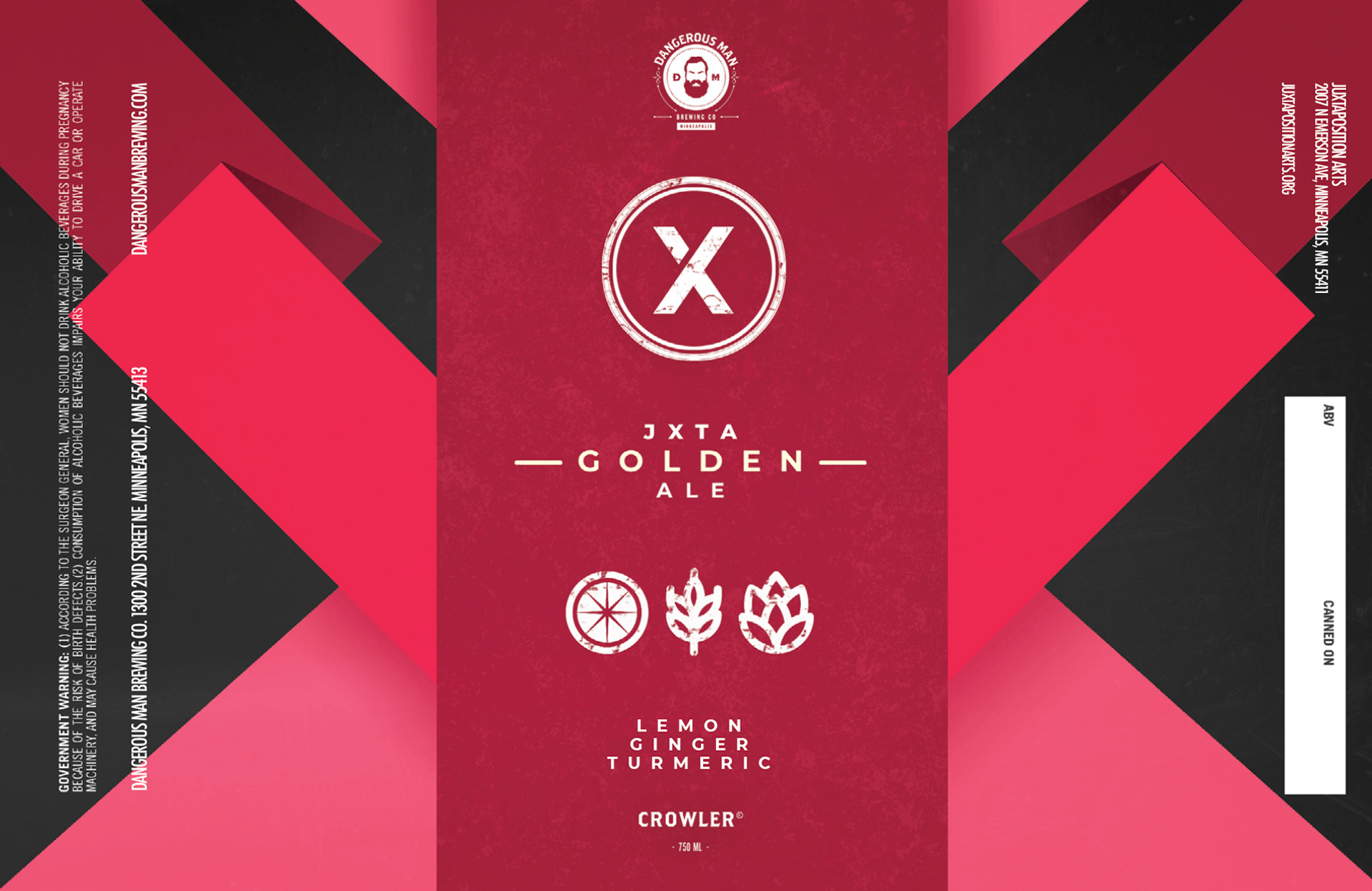 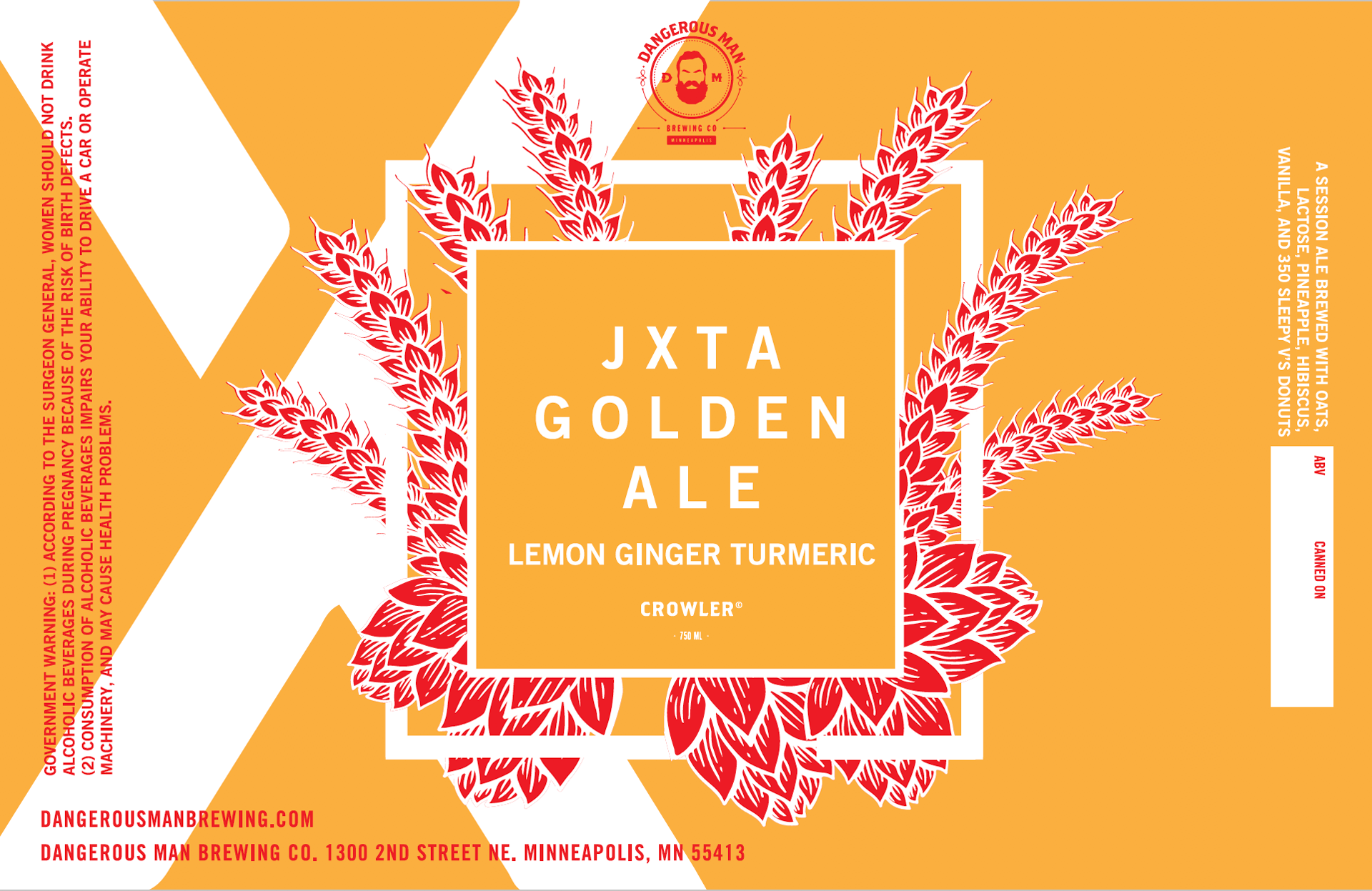 On Wednesday, September 12, Dangerous Man hosted a party to celebrate the beer’s release. Visitors had the chance to try the beer on tap, buy limited-edition t-shirts, buttons, and stickers, and learn about JXTA from our apprentices. We shared drinks, created buttons, and made new friends. Check out photos from the event HERE (photos by Riché Effinger).

Get to know the designer: Patricio De Lara 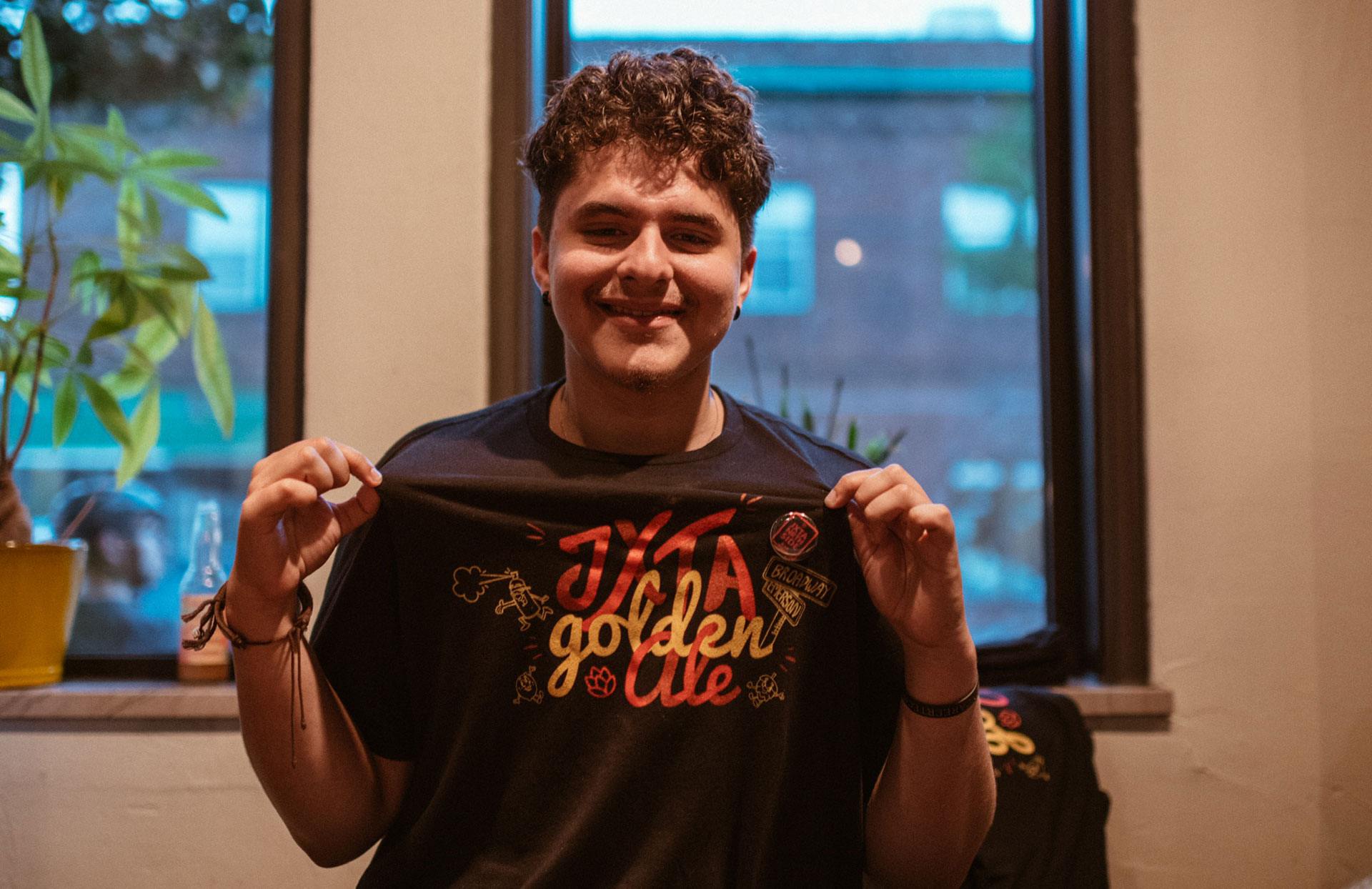 JXTA apprentice in the Graphic Design Lab since August 2017.

What was the process like designing the JXTA Dangerous Man beer label?
It was challenging, nerve-racking, and incredibly fulfilling. All of us who worked on concepts for the label wanted it so badly, so we were all extremely passionate and driven to go and get it. Greta (the Graphic Design Lab Lead) had us follow a strict design process where we would start out with 15-20 sketches, and then eliminate the ones we didn’t feel as strongly about. Once we had a full presentation deck, we played the waiting game to see which label would be approved.

How was it different from other projects you’ve worked on?
We were given a ton of creative freedom to explore different stylistic approaches and really interpret what JXTA would look and feel like when applied to something like a beer label.

How many designs were submitted?
There were a total of 15 INCREDIBLE designs. My colleagues and I really raised the bar for the quality of work that JXTA can produce. Truthfully, any one of those designs could’ve been chosen.

What narrowed it down to yours?
I think I showed the artistic and free-flowing aesthetic that JXTA has included in its creative toolbox for so long. At the same time, I was able to modernize it and make it uniquely mine.

What was the most challenging part?
Surprisingly, the chosen design was the last one I worked on, but I knew it was different than the rest of my concepts. I tried hand-lettering, which is something I’m less comfortable with. That process was interesting; I didn’t know if my risks would pay off or not, but I’m glad they did.

What was the most fun?
Being able to share this experience with the young creatives around me and learning so much along the way. We’ve cultivated a passionate and dedicated culture in the Graphics Lab, and I’m so proud of that.

What was it like to show off your stuff at the beer release event?
It made me believe in how much I can do. Being able to design all the branding for an event like that was ridiculously fun and satisfying. This is just a small step for what I will accomplish down the road, and I am so thankful that JXTA is giving me the tools I need to do bigger and better things.

Special thanks to our partners and friends at City of Skate and Young Joni for their support in making this event a huge success.